Simply Jesus Christ The All in All

Why 'Simply'?
...... It is not to minimize our LORD but rather to make the point that Christianity, in fact all of humanity can be summed up, in this one simple phrase.
Added Aug. 4 2020
WHEN DID WITCHCRAFT BECOME
THE HOPE FOR THE NATION???
The fear of a virus that has gripped the country since mid-March is expected to be a threat until a vaccine has been developed.
In the interim there are some that claim a drug HCQ (hydroxychloroquine) is a treatment for this much feared virus.
Both of these remedies come from the drug industry. Said another way, they come from the pharmaceutical industry.
Going back into the origins of the word pharmaceutical; it came from the word pharmakeia. Pharmakeia is the use of medicine, drugs or spells used in magic, sorcery and enchantment.
The idea that a once-Christian nation is now pinning it's hope for the future on a form of witchcraft should have any real Christian sitting in sackcloth and ashes repenting for what has been allowed in our nation.
The idea that we ignore what our Saviour endured so that we could be free of sickness and disease and in essence say:" yes I know He was wounded and bruised and bore a terrible beating in His body for my healing BUT I don't think that was enough, and now my hope is in witchcraft in the form of different drugs".
Ignoring the commands to preach the gospel in all the world with signs and wonders following the preaching which includes laying hands on the sick and seeing them recover. Instead masking, not meeting and singing and praising the LORD with brothers and sisters. Cowering in our homes like all the rest who don't believe:
BY HIS STRIPES WE WERE HEALED
LAYING HANDS ON THE SICK, SEEING THEM RECOVER
WHEN DID THE POWER OF THE GOSPEL
GET REPLACED WITH THE POWER OF WITCHCRAFT?


A Quote Worth Remembering

LORD Jesus I lift you up and praise your Holy Name
For Your Name is given above all names
Yet, You are the Lamb, the Prince of Peace

And I will bring You praises and honor and Glory
Forever

For You are my LORD

And I love You

A challenge to Christian leaders and believers as to the true purpose of being a follower of Jesus. It is so much more than what we have made of it and for what our precious Saviour paid such a high price. 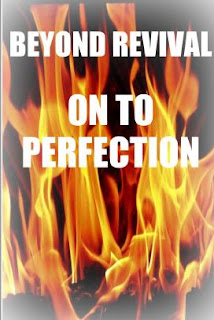 To download your free copy of this 100+ page ebook simply click on the above image and save the file to your computer.
Home
Subscribe to: Posts (Atom)